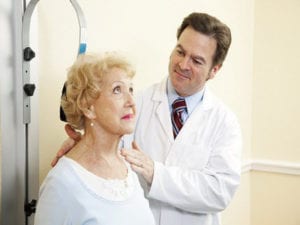 Starting in 1979, the U.S. Department of Health and Human Services has set four separate “Healthy People” initiatives; most recently, Healthy People 2020 was announced in December of 2010. A key component of this initiative has been to increase annual cancer screenings nationwide. According to an article published by the CDC, “Healthy People 2020 targets for cancer screening test use have been established, based on the most recent U.S. Preventive Services Task Force (USPSTF) guidelines.”

The lack of improvement in breast cancer screenings is particularly troublesome because screening is such an important factor in catching cancer in an early stage and improving treatment outcomes. According to an article on breastcancer.org, “death rates [for breast cancer] have been decreasing since 1989. Women under 50 have experienced larger decreases. These decreases are thought to be the result of treatment advances, earlier detection through screening, and increased awareness.” The article further states, “For women in the U.S., breast cancer death rates are higher than those for any other cancer, besides lung cancer.”

Digging deeper, while the CDC reports that “mammography use was stable during 2000-2013,” there is evidence that more women between the ages of 50 and 64 need to be pursuing regular mammography screening. Based on data from a 2013 report by the American Cancer Society, there were an estimated 26,770 new cases of non-invasive in situ breast cancers among women aged 50-64 and 22,220 cases among women ages 65 and up. Screening is critical because once an in situ cancer diagnosis has occurred, the likelihood of an invasive breast cancer in the future increases dramatically. According to the article, “Approximately 20% to 25% of women will develop invasive cancer within 15 years after the diagnosis of LCIS [Lobular Carcinoma in Situ]. Additionally “The risk of developing an invasive carcinoma following a biopsy-proven diagnosis of DCIS [Ductal Carcinoma in Situ] is between 25% and 50%.”

The CDC even stated that “increased efforts are needed to reach Healthy People 2020 cancer screening targets and reduce disparities. More intensive or focused efforts might be required.” This indicates the urgency in addressing issues with the screening program.

But why encourage these tests? With regular cancer screenings, cancers can be caught and treated in earlier stages, increasing both survivability and the overall health of the American people.

According to the National Cancer Institute, “For many cancers, the chance of recovery depends on the stage (the amount or spread of cancer in the body) of the cancer when it was diagnosed. Cancers that are diagnosed at earlier stages are often easier to treat or cure.” Breast cancer is a classic example of this. According to Cancer.org, breast cancers detected and treated at stage 0 and 1 both have a 100% 5-year survival rate (meaning 100% of patients whose cancer was detected early were alive 5 years later). For breast cancers caught at stage 2, the survival rate decreases to 93%. At stage 3, survival drops to 72%, and for stage 4 breast cancers, the 5-year survival rate is only 22%.

But what does this really mean for you? It’s very simple. Regular cancer screenings don’t boil down to a government program or something you eventually add to your to-do list. It is something much more elemental: it means saving your own life, your mother’s life, your significant other’s life. When cancers are detected early enough, the rate of survivability increases substantially. It’s not just another to-do. It’s your life. Make an appointment today.