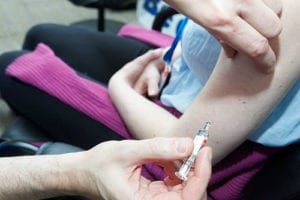 In the year 2000, the widespread use of an effective vaccine for measles led to the elimination of measles as an endemic disease in the US. However, due to declining vaccination rates, measles infections have been on the rise recently, mostly among people who have not been vaccinated. A large multistate outbreak of measles started in late 2014 in an amusement park in California and has spread to 17 States. Measles is a very contagious disease. The virus is spread by direct contact with infectious droplets or through the air when an infected person breathes, coughs, or sneezes. If 10 susceptible people have close contact with a patient with measles, 9 of those 10 people will develop the disease.

Some patients with measles just have a rash and a fever that lasts a few days, but measles can cause serious health complications in some patients, especially in young children. Statistics from the Centers of Disease Control tell us that:

(which can result in brain damage)

Some parents do not let their children get vaccinated. This is because of unfounded fears that the MMR vaccine, which protects against measles, mumps, and rubella, can cause autism. Parents and caregivers should know that: