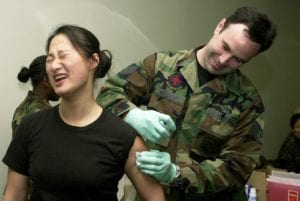 California’s environmentally-crippling drought isn’t the only reason the Golden State has been in the news lately. Despite protestations from some its most revered celebrities, the state of California recently passed monumental legislation in the fight against those opposed to routine vaccinations, often called “anti-vaxxers.”

The law signed on June 30 by California Governor Jerry Brown will require all children to be vaccinated against a number of diseases that have become all too common in the state and a number of other places in the U.S. According to KQED News, “starting July 1, 2016, all children enrolled in public or private schools or day cares must be vaccinated against whooping cough, measles and other diseases, regardless of parents’ religious and other personal beliefs.”

The legislation is in response to a number of significant outbreaks and even deaths related to diseases that have typically not been found in United States children for a number of years. For example, the state of Washington recently announced the first death from measles in America in 12 years, and the number of measles cases has been growing in recent years.

In fact, according to the Centers for Disease Control and Prevention, the first seven months of 2015 saw 178 cases of measles despite it being highly preventable through vaccines. A large number of those cases originated in California last winter when an outbreak of measles began at one of the state’s famed amusement parks – Disneyland – and went on to infect 117 people.

This legislation is particularly timely due to the month of August being National Immunization Awareness Month. California – and a few other states – have been at the forefront of the science versus personal opinion debate recently. Fueling the debate have been a number of noted celebrities such as Jenny McCarthy and Jim Carrey, who have spoken out against certain vaccines over fear of the effects they have on children. McCarthy and Carrey have each been known to claim that vaccinations actually cause other diseases or even cause the diseases they are intended to prevent. Both, however, maintain they are actually in favor of vaccines, just not the ones being given to children.

Of course, it would be unfair to blame these cases on just a couple of celebrities or even the slightly larger contingent they inspire. However, it is undeniable that preventable diseases such as measles, rarely seen over the past half century since the advent and institutionalization of vaccines, are on the rise. Also on the rise is rhetoric making it easier for parents to avoid vaccinating their children despite the overwhelming body of scientific evidence that shows it is in their best interests.

Hopefully California’s new law will have some impact on this harmful trend, and this August, remember that it is National Immunization Awareness Month. You can learn a great deal about vaccines using the helpful resources on the CDC’s website, and if you have questions about vaccines, immunizations, or preventable disease, make an appointment with your doctor to have an honest talk about the benefits and risks of immunization.