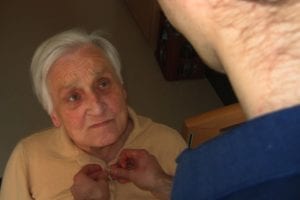 Take out your purple gear this September for World Alzheimer’s Month! Seeking to bring attention to a disease that affects nearly 47 million people worldwide, we celebrate World Alzheimer’s Month this year by bringing out our purple gear and spreading the word. Adults with Alzheimer’s face an uncertain and changed world, and they are often unable to care for themselves. Raising awareness about this disease—by advocating knowledge, prevention, treatment, and care—can help improve the quality of life for a huge segment of our population.

Alzheimer’s is the sixth leading cause of death in the United States and is the only top ten leading cause of death that we cannot prevent or cure. Research continues to unearth theories to explain it, but none are wholly accepted. We do know that Alzheimer’s disease is associated with protein build-ups in the brain, called amyloid plaques and tau tangles. The disease also causes an erosion of neurons, which are responsible for the transmission of messages within the brain. Often, these changes take many years to manifest, and they culminate in the many symptoms we associate with Alzheimer’s disease.

Alzheimer’s is often difficult to diagnose. This is the case not only because the symptoms take a while to manifest, but also because we do not fully understand the symptoms associated with the disease and often confuse them with the normal process of aging. For example, Alzheimer’s is associated with memory loss, though this is not the only symptom. There may be a range of issues, including misunderstanding visual cues, making bad judgment calls, and developing problems with reasoning and language. There could even be changes in personality or behavior.

These are all red flags for Alzheimer’s disease, though memory loss is the primary symptom. Mild memory loss is a natural part of aging and often does not affect everyday life; forgetting where something was placed every once in a while or forgetting an appointment are regular occurrences for even the most sharp-minded individuals. More extreme memory loss usually signals a form of dementia. For example, a person with Alzheimer’s may not be able to retrace his or her steps after losing the car keys or may quickly become agitated after losing track of the thread of a conversation. Individuals with Alzheimer’s may be unable to drive a car or perform other tasks they previously did every day. More drastic changes in behavior and memory are certainly reasons to talk to a doctor. As with many medical conditions, it is important to recognize out-of-the-norm behaviors and to act early when they are first recognized.

Catching the symptoms early means that they can be treated earlier as well. There are many ways to treat Alzheimer’s, even if there is no cure. Its progression may be slowed by certain drugs that can help stop the spread of tangles and plaques in the brain. Some medications also affect the chemical transmission of signals. Treatment often extends life expectancy drastically while also improving the quality of everyday life. Early detection and treatment can also substantially improve the life of caretakers. Such things as knowing and accepting the changes in a person’s behavior can enable a caretaker to create moments of happiness. These are called behavioral treatments.

When individuals are diagnosed with Alzheimer’s disease, their lives and the lives of their family members change forever. We now understand new ways to help those with Alzheimer’s, and we are continually learning more about this disease. We know that through regular exercise, a healthy diet, challenging mental activities, and healthy social relationships, we can delay the onset of Alzheimer’s or even alleviate its symptoms. We all have the power to raise awareness about Alzheimer’s disease and make life better for those who are affected by it. So this month, grab some of that purple gear and show your support for those who are suffering from Alzheimer’s!

Alzheimer’s Foundation of America. (2015, May 28). About Alzheimer’s disease. AFA. Retrieved from https://www.alzfdn.org/AboutAlzheimers/definition.html